Back in February, I wrote that I was curious about tracing Srull & Wyer (1979) forward. So, actually, I decided to do it. You may have noticed, as I have summarized some of the interesting papers in this trace. (They come right before this post, so I don’t bother to link).

I must say, the site has a lot of nice tools for summarizing cites.

So, here are some taken directly from Web of Science (or is it Thomson Reuters now).

Impressive amounts of cites for this paper, so I think I’m right in considering it a classic.

And, look who the top citing authors are!

Did you startle at number two?

But, back to what I decided to do.

Obviously, I’m not going to painstakingly collect and categorize 800 papers all by myself. (Or, maybe not so obvious, come to think about it). But, I wanted to be quite formal about what I set out to do.

I wanted to see how this idea has evolved over time, and tracing citations may be a way to do this. I began to think about it as a Golgi Stain, but in the virtual felt of science rather than cortex.

I decided to pull all the papers in the first 5 years. (Turns out that was 53.) I could find all but one of them (A swiss paper, barely cited).

Through the loveliness of PDF, I screenshot the Abstract, and found and screenshot every time that Srull & Wyer 1979 was cited in the paper.

In two it was only cited in the reference list…

Median number of times cited is 1.

Then I did some rough classifications based on the Abstract. I noted whether it reported an experiment, if it was a review or some other type of theoretical paper (there were a few proposed models and measures). I also noted down if I thought it actually extended Srull & Wyer, whether I thought the topic was related but not directly extending, and whether I thought it was more oblique.

There were 11 papers that looked like they pursued an extension, out of the 53 I pulled, so I began looking at them more closely. I blogged my initial scrutiny of just about all of them (Except Srull & wyer 1980, for some reason). 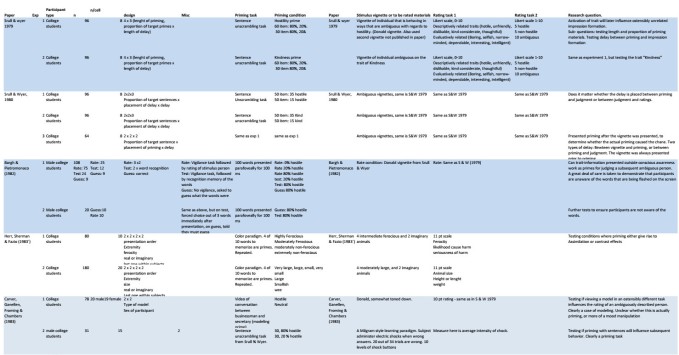 (I think you can click on them to make them readable).

These are some simple classifications of type of priming, priming measures and construct primed.

It gives a somewhat, well, motely impression. The extensions go in all sorts of directions, and are not quite extensions, but more inspired by the work. Patterns are emerging, but perhaps it would be worth it going 50 more papers (or 5 more years) in the future for a more coherent trace.

I’m now working on pulling together something more coherent with these papers. (Turns out one of them found no priming effect, and was oblique enough that I won’t include it).

I’m working on learning the R-index, which I think is reasonable even across such a motely bunch of papers (I do have a very rigid rule for what is pulled in), and possibly trying the p-curve and v-index.

N-s are on the small side. There are lots of places where error can creep in. Some papers are more trust-inspiring than others.

I’ll be updating, as I proceed. I’m planning to make a paper out of it, because it is interesting, but the method for selecting papers is a little unusual, at least for something formal.

... because if I'm in a room with a second person, I want to be reasonably sure I'm the crazier one.
View all posts by asehelene →
This entry was posted in Uncategorized. Bookmark the permalink.